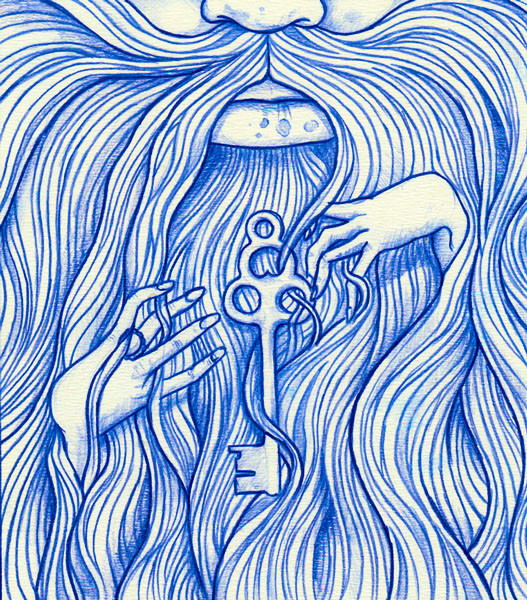 Pix credit - http://www.alvarodealmeida.com/?page_id=407
I have chosen the fairytale Bluebeard as my possible mini dissertaion for my Integrative Literary Study. I wanted to use fairytales because they weren't the Disney-fied pap that we get today.  They were cautionary tales told by parents to children,  to warn them to not stray from the path (or if they did, walk purposely and carry a big stick).  I am shying away from typical beleagured princess wannabe finding a prince/woodcutter/frog thang and come down to the nitty gritty dynamics of the Bluebeard tale.


Bluebeard is a wealthy aristocrat, feared and shunned because of his ugly, blue beard. He has been married several times, but no one knows what became of his wives. He is therefore avoided by the local girls. When Bluebeard visits one of his neighbors and asks to marry one of her two daughters, the girls are terrified, and each tries to pass him on to the other. Eventually he talks the younger daughter into visiting him, and after hosting a wonderful banquet, he persuades her to marry him. After the ceremony, she goes to live with him in his château.

Very shortly after, Bluebeard announces that he must leave the country for a while; he gives all the keys of the château to his new wife, telling her they open the doors to rooms which contain his treasures. He tells her to use the keys freely and enjoy herself whilst he is away. However, he also gives her the key to one small room beneath the castle, stressing to her that she must not enter this room under any circumstances. She vows she will never enter the room. He then goes away and leaves the house in her hands. Immediately, she is overcome with the desire to see what the forbidden room holds; and, despite warnings from her visiting sister, Anne, the girl abandons her guests during a house party and takes the key to the room.

The wife immediately discovers the room's horrible secret: its floor is awash with blood and the murdered bodies of her husband's former wives hang from hooks on the walls. Horrified, she drops the key into the pool of blood. She flees the room, but the blood staining the key will not wash off. She reveals her murderous husband's secret to her sister Anne, and both plan to flee the castle the next day; but, Bluebeard returns home unexpectedly the next morning and, noticing the blood on the key, immediately knows his wife has broken her vow. In a blind rage, he threatens to behead her on the spot, but she implores him to give her a quarter of an hour to say her prayers. He consents, so she locks herself in the highest tower with Anne. While Bluebeard, sword in hand, tries to break down the door, the sisters wait for their two brothers to arrive. At the last moment, as Bluebeard is about to deliver the fatal blow, the brothers break into the castle; and, as he attempts to flee, they kill him. He leaves no heirs but his wife, who inherits all his great fortune. All of Bluebeard's dead wives are buried and she uses part of his fortune for a dowry to marry off her sister, another part for her brothers' captains' commissions, and the rest to marry a worthy gentleman who makes her forget her horrible encounter with Bluebeard.

Now there are many tales of Bluebeard, from Angela Carter and beyond, including Fitcher's Bird and The White Dove.  There have been many rewrites on the adult forums - some really crap and some absolutely inspired. I have a feeling that this will take a psychoanalytical/feminist slant (I can't really see how I can sneak Marxist/New Historicist et al in there).  I also thing it is about reclaiming something, or even owning something - not quite sure but I think this will be something I could run for miles with.
Tags: angela carter, bluebeard, fairy tales, fda english y2, grindstone files - year 2, integrative literary study
Subscribe