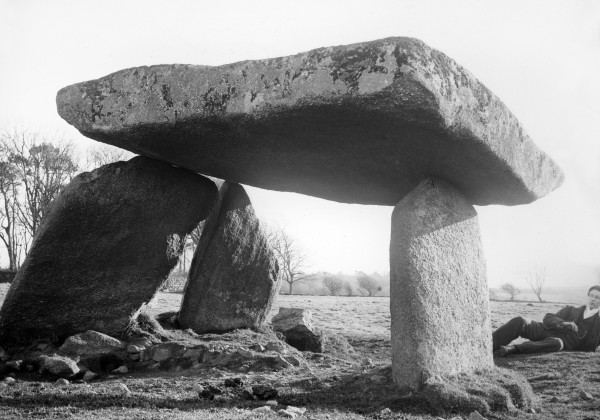 Today is the final placement of the capstone of Carwynnen Quoit, a neolithic monument, which collapsed over forty eight years ago.  I think it is the first rebuilt monument in recent Cornish history and it is especially significant that it is rebuilt on the Summer Solstice.  I will be out to take shots of it and will saddle up with shades and sunblock, because it promises to be absolutely roasting :-)

The excavation revealed the full extent of the original footprint of this megalithic monument. Massive socketholes for the three principal granite uprights were discovered. Members of the Cornwall Archaeological Society were among the team whose major discovery was a largely intact and well-preserved artificial chamber “floor”.

This paving was made up of two elements, one of which was a narrow strip of compacted small stones which formed a hard- standing surface arranged in a doughnut-like circuit.  This circuit wrapped around, and contained within, a pavement made up of larger stones. Both surfaces would have been protected by the suspended capstone when it was in place, but, at the front end of the monument (in the north-west), a fine narrow strip of the pavement extended well beyond the shelter of the capstone.

Numerous finds of flint, some prehistoric pottery and worked stone objects were  found across the entire excavation trench. Amongst the best finds were a unique greenstone pestle, the tip of a greenstone axe, flint blades and worked fragments of prehistoric pots (possibly Bronze Age) as well as a few sherds of Neolithic pottery. Another interesting find were numerous small granite balls, purposely rolled and many no larger than ping pong balls.