The Moon - Love Child of the Earth and Theia 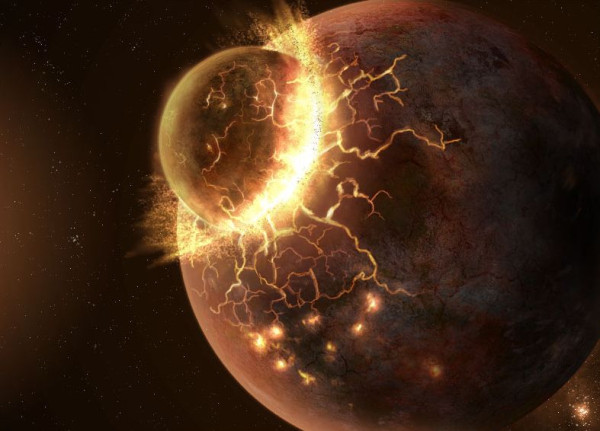 Interesting news this week, where astronomers have found new isotopic evidence to support that the moon is the result of a collision between the Earth and another Mars-like planet Theia.  Measurements of oxygen, titanium and sillicon, amongst others has been the center of interest.  Charles Darwin had already concluded that the moon was just an off-cut from our planet, however, further scientists had formed a theory that actually it had been in collision with another planetary body (possibly the last one of many whilst the planet was created 4.5 billion years ago), rather than being created by centrifugal force.

Traces of another world found on the Moon

Researchers have found evidence of the world that crashed into the Earth billions of years ago to form the Moon.

Analysis of lunar rock brought back by Apollo astronauts shows traces of the "planet" called Theia.

The researchers claim that their discovery confirms the theory that the Moon was created by just such a cataclysmic collision.

The study has been published in the journal Science.

The accepted theory since the 1980s is that the Moon arose as a result of a collision between the Earth and Theia 4.5 billion years ago.

Theia was named after a goddess in Greek mythology who was said to be the mother of Selene, goddess of the Moon. It is thought to have disintegrated on impact with the resulting debris mingling with that from the Earth and coalescing into the Moon.

It is the simplest explanation, and fits in well with computer simulations. The main drawback with the theory is that no-one had found any evidence of Theia in lunar rock samples.

Earlier analyses had shown Moon rock to have originated entirely from the Earth whereas computer simulations had shown that the Moon ought to have been mostly derived from Theia.

Now a more refined analysis of Moon rock has found evidence of material thought to have an alien origin. According to the lead researcher, Dr Daniel Herwartz, from the University of Goettingen, no-one has found definitive evidence for the collision theory, until now.

"It was getting to the stage where some people were suggesting that the collision had not taken place," he told BBC News.

"But we have now discovered small differences between the Earth and the Moon. This confirms the giant impact hypothesis."

But the difference, some say, could be explained by material absorbed by the Earth after the Moon formed.

And Prof Alex Halliday of Oxford University, is among many scientists who are surprised that the difference between the Theian material found in the Moon rock and the Earth is so small.

"What you are looking for is a much bigger difference, because that is what the rest of the Solar System looks like based on meteorite measurements," he said.

Dr Herwartz measured the difference in what is called the isotopic composition of the oxygen contained in rocks on Earth and Moon rock. This is the ratio of different forms of oxygen.

Studies of meteorites from Mars and the outer solar system show that these ratios are markedly different - rather like a fingerprint. So Prof Halliday and others are puzzled by the fact that the fingerprints of Earth and Theia seem almost identical.

One possibility is that Theia was formed very close to the Earth and so had a similar composition. If that was the case, it raises the possibility that the assumption that each planet in the current Solar System has a markedly different fingerprint needs to be revisited, according to Prof Halliday.

"It raises the question of how well the meteorites from Mars and the asteroid belt in the outer Solar System are representative of the inner Solar System? We do not have samples from Mercury or Venus.

"They may well be similar to the Earth. If that is the case then all the arguments over the similarities of the Earth and the Moon fall away," he told BBC News. Dr Mahesh Anand from the Open University described the research as "exciting" but noted that the data was from just three lunar rock samples.

"We have to be cautious about the representativeness of these rocks of the entire Moon, and so further analysis of a variety of lunar rocks is required for further confirmation," he said.

Other theories have been proposedto explain why the composition of the Earth and Moon are so similar: one is that the Earth spun much faster before impact, another is that Theia was much larger than current models suggest.

An alternative, controversial, theory proposed by Prof Rob de Meijer of Groningen University in the Netherlands is that the Earth's crust and mantle was blown into space by an accumulation of nuclear material 2,900km (1,800 miles) below the surface. It was this debris that clumped together to form the Moon.

He told BBC News that the new finding - demonstrating that there was a difference in the composition of the Earth and the Moon - did not change his view.

"The difference is too small," he said. "We don't know how the Moon was formed. What we need are manned missions to the Moon and a search for rocks deeper under the lunar surface, that have not been polluted by meteorite impacts and the solar wind."

Nothing can be conclusively proved as yet, but is more likely than not. The Independent had claimed that 70-90% of the moon is likely to be comprised of Theia.