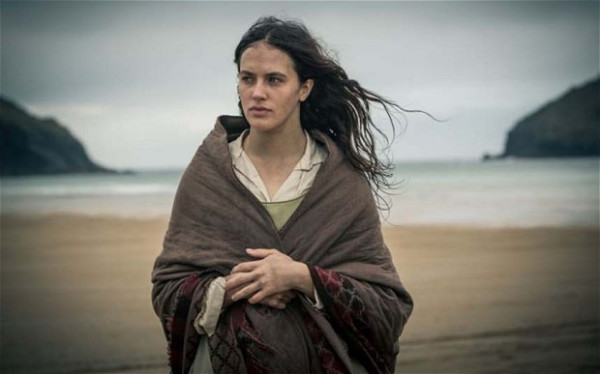 Jessica Brown Findlay in the BBC's 2014 dramatisation of Jamaica Inn
Just watched the new Jamaica Inn series on Beeb 1.  My classmates are scathing about it, understandably - varying from 'shocking' to expletives not really suitable for printing.  It's ok, camera angles very reminiscent on Andrea Arnold's version of Wuthering Heights (2011), some of it worked really well, some plainly didn't.  Perhaps if they changed the words 'based on' to the words 'briefly alluding to' Daphne Du Maurier's gothic novel, it may have worked....or not.
The accent is a bit confused too - Bristol and Dorset, via County Fermanagh. It's a shame, because this classic was due for a remake, but they didn't even use the original Jamaica Inn - doubly annoying.  Oh well, I will watch with interest (and with popcorn).  I feel a drinking game coming on, though.....

EDIT ::: According to a fellow classmates, this was shot in Yorkshire!!! Why? Is Yorkshire granite more photogenic than Cornish? No wonder I recognised the moorland scene - it was from the Wuthering Heights film, circa 2011!!! Not seen tonight's episode as yet, am hoping the sound quality improves. Not a lot of hope for the storyline, which have been chopped about for artistic licence.
Tags: daphne du maurier, jamaica inn
Subscribe