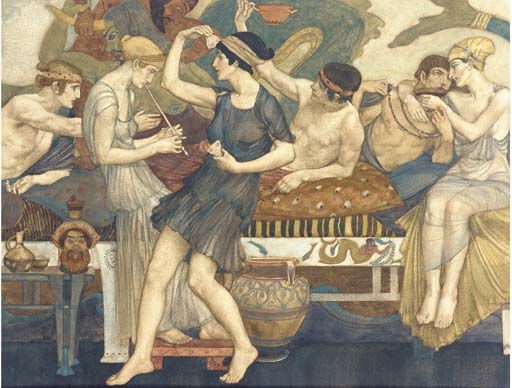 I must admit to labouring on it a bit - mainly because I had a MRI scan of my head a few days ago and try as I might, I can't put the pending results to the back of my mind (no pun intended).  I DID manage to listen to book 3, and found that the descriptives of the 'wine-dark sea and the rosy-fingered sunrise are becoming repetative as indeed, they are repeated often. Bit of a shame that Homer (or indeed a *team* of Homers as it is believed) was running out of descriptives this early on - I wonder if that's the reason that old Bill Shakespeare *possibly* got others to ghost write his stuff.  So many rumours that both men were not the sole writers of their work, but nothing proved either way. Maybe Alan Smithee and The Alias Men wrote it.

I tried to listen to book 4 and my attention started to wander. So, scaled back and had a bit of a ponder on book 3 instead.

The next chapter seems quite bloodthirsty, as if the slaying of bulls, the stories of the defeat at Troy, and the bloodied love triangle of Aegisthus/Agamemnon/Clytemnestra wasn't enough.
Tags: homer, odyssey
Subscribe