Punk Ass Has Left the Building 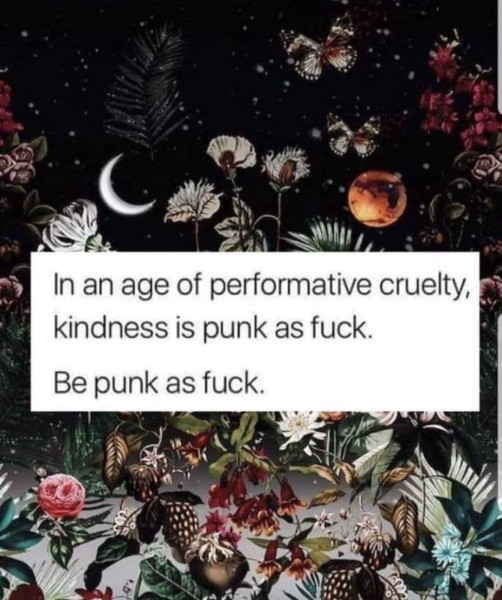 The term at the hen house has come to an end, which I am quite relieved. In truth, we should've been released last week, but it gave us a couple of days where we were paid to sit on our arses, burning our retinas out by extended phone play. I learnt by that mistake and brought a book the next day. The thing is, I thrive on isolation. I like being immersed in my own head, where I can let my imagination run riot. I have an array of media that helps me do this - alongside other outlets named in other posts, I have discovered Dr Dick's Dub Shack (Bermuda) courtesy of Radio Garden. In regards to conversation, I am used to chipping in now and again, and everything is sweet.  Except when you have to remove the earphones to learn how to process other ordering methods. I have to refer to others about this - lo and behold, I am cut off from anything that gives me sanity (curated music, history and art podcasts, Joanna Harris' The Strawberry Thief ) and I am plunged into prattling convesrations, where I have to dial it back a bit. I don't do small talk, I do 'life-and-the-universe' talk - or I don't talk much at all. This leads me to projecting as a bit full on, or have nothing to say. Je suis connisseur d' low key.

So how are things across the levels?

Physically, I am recuperating and after the storms pass over, I plan to be out walking a lot. This past week, the south west corridor has been frying - topped 31c (87f) here. Now before I get any carping from overseas, the Brits are not good with the heat. We are used to wet summers, knotted hankies and knobbly knees. We don't have paper thin houses and air con; we have houses that are thickly insulated brick ovens with absolutely NO CON. We've never needed it. Remember British tennis or cricket, and rain stopping play? That's because it rained. A lot. Fat drops of splashy rain that delayed Wimbledon Ladies' Finals, so SW19 invested in a roof on centre court, because in the long term, delays cost far more than getting the placed covered. Plus the humidity, 70% in some places, higher if you are in the Celtic fringe (hello, that's me by the way). Fans on full blast that merely generate a luke warm soupy air. So, picnics and wasps? Yes. Being poached in your own juice at night? No, no no.

Mentally, I am in a *far* better place than when I was on the campsite. I am happy because I have learnt some skills at the photo lab, plus I am going back to the last bits of my proofreading module. Artistically, I'm playing around with mixed media in a scrapbook journal, which ironically I started to do while being keyed up over the old job from last year. I also want to play with my old SLR, which hasn't seen the light of day for a couple of years now.

Right now, I'm ok, which is better than some.