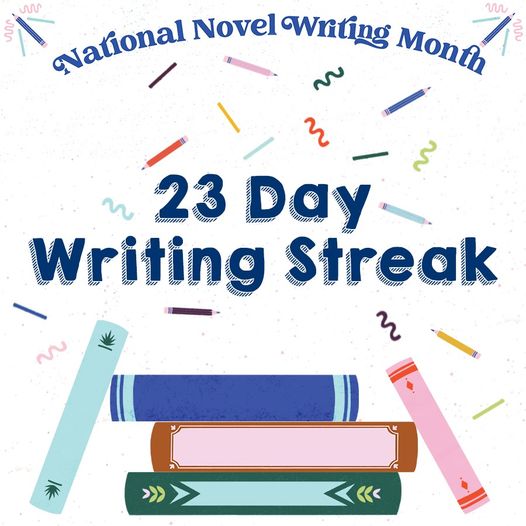 Just gone over the 45k mark and therefore less than 5k until the finishing line.

I'm really happy, because my besties are back in the fold. Once came back to Pasty Land to live permanently as of last week. We are looking forward to creative work together - this is long overdue. My other bestie is due back at the end of the week, looking for accomodation when they arrive. Both reacted well to the NaNoWriMo experience; the former is a budding writer herself, the latter listened and considered the piece very psychological - which is right up their street. This 'idea boucing' was what I wanted in my academic life of the way up to graduation, but was saddled with people who were barely interested in their degree and certainly didn't want the older student involved. The sad thing is, if I had attended the year before, I would've fallen over mature students who were eager to have a philosophical and creative rap. Even the year below me was alive with interesting and interested students.

* sigh *
At least this feels like the personal gathering of the clans for me. Singularly, I have missed them both so very much and because they don't know each other, I might just introduce them to each other. Think that might be good all round (or indeed the worst thing - who knows?).