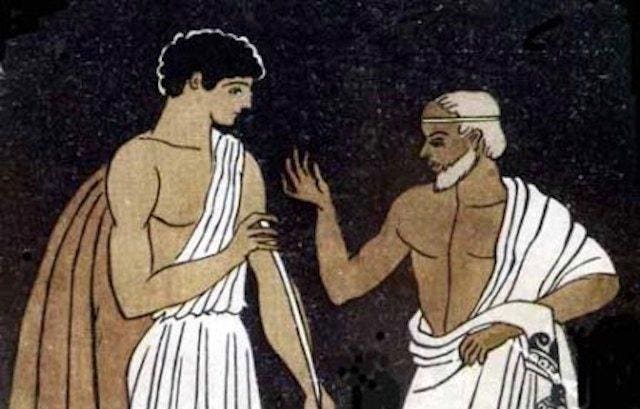 Telemachus and Mentor, the original mentor in Homer's Odyssey. By Pablo E. Fabisch

Well, I promised myself that I would fill the gap in my learning that was largely due to being at a satellite college, that was on a different literary path tha the mothership university. I will discuss this in layman's terms because although I have graduated, I am reading/listening to The Odyssey for research purposes only. I won't look at it with a lit crit head on, but may dip in and out to suit my point of view.

1) Athena (disguised): And now have I put in here, as thou seest, with ship and crew, while sailing over the wine-dark sea to men of strange speech...

I loved that image, but it got me wondering. Apparently, there are several mentions of a 'wine dark sea' in both The Odyssey and The Illead, depicting a stormy, rough sea. Yet, I had wondered about the development of language back then. This text was written 8th century BC before people had established names for shades of colour. Across the world, it appears there had not been a word the hue that is blue. A few have mused that Homer (if he indeed existed) was colour blind or indeed totally blind - the narrator is meant to be an old, blind man (I haven't established as yet if the narrator is Homer himself or idealised self-inserted Mary Su).

2) Also how the sunrise is 'fresh and rosy-fingered' - a beautiful image for the cold dawn being dispelled by the golden pink first light.