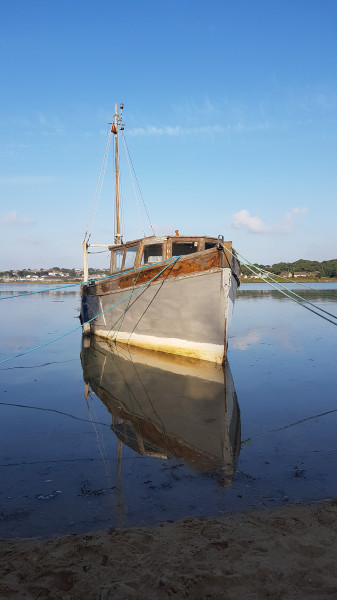 Today has been one of the worst days this year. I am back to work (campsite shop)and found that the shop was not 'Covid19' ready, despite the signed off paperwork to suggest it was. We were meant to be trained - the training amounts to reading it on the run and applying the measures by the letter.

I can guide the public, be covid19 aware, clean stations, email, rotate stock, finalise paperwork, serve customers and even be pleasant to them - what I can't do is deal with a boss who is behaving like a massive 68 year old toddler, having a strop because he can't find his ass with both hands. I clam up because most of the stuff he is asking me is stuff that I know zero about, like the bloody breakfast boxes and pastry deliveries that someone else knows about.

Ordinarily, I don't expect to be blown up or hung up on for 2 days on the trot, plus the startings of one today. I can't stand up to him as I don't know how to. I simply don't have the tools for a bombardment of questions, followed by foaming from him. He said he wasn't 'angry' he was 'irritated' by the suppliers and that I would 'definitely know' when he was angry with me. The words 'gaslighting' and 'bastard' come to mind. He eventually backed off when I crumpled. I have no one I can complain to further up as he masterminds 10 shops and valued far higher than I. All lines of communication are closed.

Basically, I had a meltdown while on the phone to him. And more when I came home - like a cascade, which l have never had before. Anything set it off - gobby people outside my window, boy racers screaming up the road. Numbness. Rage. Silence. Crying. I only had 3 hours sleep last night and only 8 hours over the previous 3 nights.

I requested a doc call and doc phoned at 7.30 this evening. We discussed medication (not on any, was on Sertraline but it gave me an upset stomach - all other antidepressants are a variation on this), but decided that if l had anything stronger, it literally be for interventive reasons and not ideal. We also discussed Yoga and various Calm apps.

I have a phone appt with an NHS Therapy Centre to discuss ways to deal with stress. Dr suggested that I should keep my working hours around the 20 mark, so I don't get too overloaded. He also suggested I should get another job, Because of age, era, locality and Covid19, my horizon is significantly narrowed.

Currently scrunched into a ball. I. Just. Can't. Process. It.
Collapse