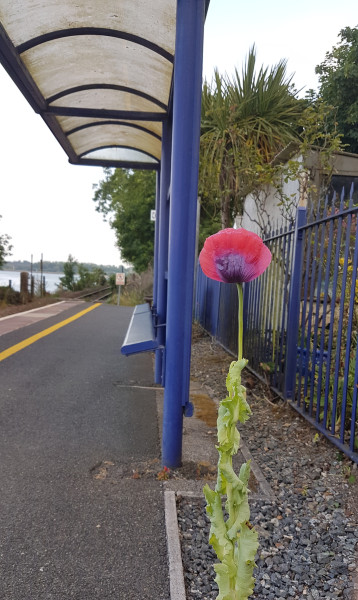 I don't go out much these days. I am 'shielding'- not because I come under the category of 'vulnerable', but in seeing my sister ill and that those of a chunky, menopausal disposition could be adversely affected, plus l haven't had a working car since March, it has happened 'de facto' in any case.

I listen to the scientists daily - and the odd slip, like "oh the R level is up to 1.1 in the south west, but if we bung it in with the other regional stats, we can kinda average it out to 0.7-0.9". Oh. Oh really. The politicians less so (only half an ear to them, so I can track what those bastards are proposing next), but generally I want to put my paws over my ears and shut the whole fucking lot out. Have we EVER lived previously in such times of fear and hatred? Why, just why? I suppose when you wall people up for months, then let them all unwind at once, it gets seriously messy. It's like thr 'Three Minutes Hate' from Orwell's '1984' but it's months not minutes.

I have to remind myself that if l do feel angry, bored, anxious and depressed, then it is justifiably so - because now the world has gone crazy. Some people have taken confinement well. Me? More like a duck to a bullet. It's because l think "How can you seriously say that you are content, when outside your door, people's lives are on fire?' Over 41,000 dead, ONS says that it is quite possibly closer ro 60,000 and climbing. I mean, do you just look at the clock and go "hey ho, it wasn't me. Now let's open up the shops and schools - I want a haircut"? Please tell me how you put your head in the sand, because I really want to know. Or is the sand in your ears the stuff that's leaking out of your head?

Man, maybe l need some sand, if it will block the noise out.

I drift, losing sight of time, structure, meaning. I have nothing to write about, nothing to say, except I wish the noise would stop drowning me. Scientists drably droning, politician pumping out superlatives, praising themselves that they effectively turned an epidemic into a pandemic by not responding in time, then clapping themselves on the back for making it only a 'teensy weensy bit of a pandemic than it COULD have been' (* cough * herd immunity is still on the table *cough *). People having a negative point of view on just practicality anything, myself now included.

Hence the reason why I don't post much on here. I used to just keep the door open to say "Hi, I'm still here", but I can't fudge my absences with daft, vaguely humourous postings, or thought provoking/stunning platitudinal qoutes. Because the world aint funny nor soulful anymore.

It can be weird, though. A couple of days ago, I went for a walk to the Estuary and I saw a poppy waiting for a train. I told her that there wasn't one due for an hour. She said she didn't mind and that she would wait. Pretty flower, l thought. I wonder where she thinks she's going.