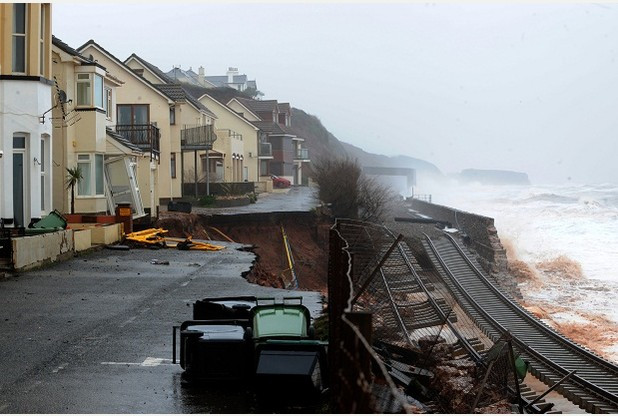 Dawlish Railway line - pathway to Cornwall - http://www.exeterexpressandecho.co.uk/Picture-Strom-damage
Many people from the UK would have seen this on the news last night.  Most of the attention (quite rightly) has been given to the ongoing plight in the Somerset levels - however Devon and Cornwall's battering over the last couple of days has seen events have a dramatic twist.  It has been well documented about the sea rolling into the shops of St Ives and tearing sizable chunks out of Newlyn Green - now this is serious.

Above is part of the mainline route to Cornwall - Dawlish in Devon.  I have taken the route many times and the outstanding feature of this beach is the dramatic brick-red sand.  Now it is the devastation of the whole track, which is now partly suspended in mid air.  Many trains are cancelled, some rerouted and other lines are closed because the aggregate has washed the ground underneath the track.  There aren't enough emergency coaches put on to cover this, so Cornwall is stuck at the moment.  It is estimated that this storm alone will cost Cornwall £10 million pound ( just over $16 million USD), with more weather to hit us at the weekend.

Under the cut, there are more photos of my area (18 miles from Lands End).