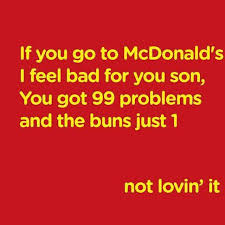 4. If You Could Close One Fast Food Chain, Due To Disgusting Food, What Would You Pick?

My husband adores them, pays homage at least once a week and I think probably would live in there if they provided a bed for the night. He creeps in, furtively eats his Chicken Legend and plastic icecream and leaves probably less sated than he went in ("It's such a disappointment").  I don't know if you can tell, but I detest CrapDonald's.  I am not a big fan of chips, despise burgers, reject the too-sweet milk shake and other choices on its frankly artery-closing menu.  I especially detest the apple turnover, which when warmed up, must at least be the same heat as the surface of Venus.  I hate the bouncing noise, the overt false cheeriness, the fake cringy brightness of the place.

KFC only ranks a measly second, because there are marginly less of them.
Tags: 30 questions 2019
Subscribe