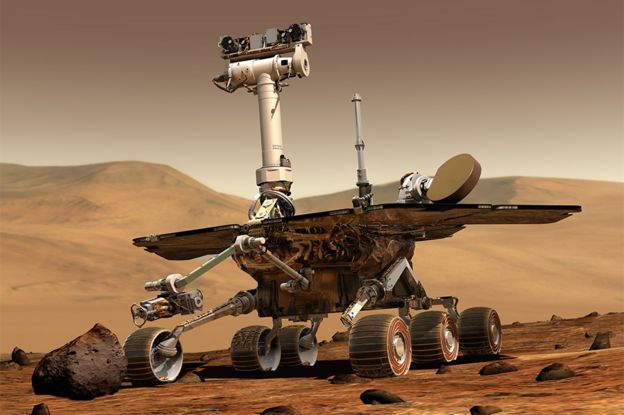 Much has been made of the story of how NASA launched the Mars Rover Opportunity in January 2004 alongside her twin, Spirit.  The Rovers far exceeded the expectations of the scientists on Earth; originally they expected to work for just over 90 Martian days (not far off the same as our Earth days) and went on to work for 6 years and 14 years respectively.  Acting as remote, mobile geologists, the Rovers collected specimens that would determine soil, strata and distribution data, amongst other things.  Spirit was active until March 20th 2010 and the much-lauded Opportunity (nicknamed Oppy) was last heard of on June 19th 2018, after a global dust storm engulfed the planet and the Rover was never heard of again.
Apparently, Oppy had been programmed to do many things, some of which gave the robot vehicle a curiously human aspect, reportedly humming 'Happy Birthday' to itself.  It even had managed to give itself a selfie in recent times, making it seem less of a robotic information collector and more like the sentient Johnny Five from Short Circuit. .NASA had hoped that the storm clearing in January would help reboot the robot's system - alas, it was not to be and on February 13th, after over a 1,000 recovery commands sent, NASA has called time on this now legendary vehicle.  Their message to their beloved bot caused many an eye to mist on Twitter. 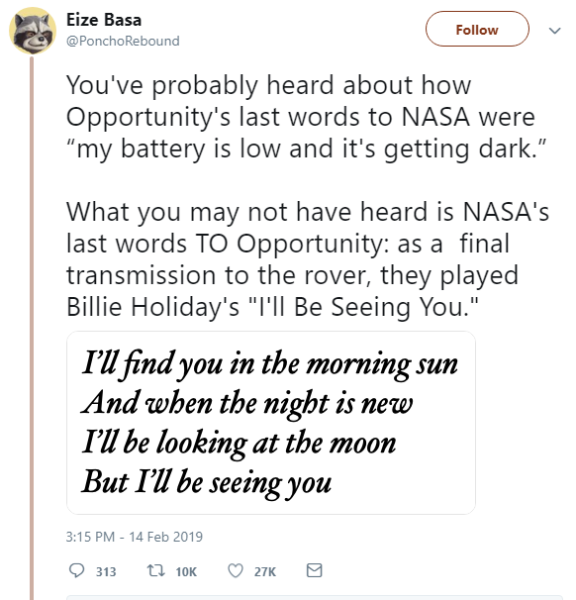 They played her a love song....* sniff *
Its younger sister, Curiosity (stationed on Mars since 2012) had braved the storm with its more hardy plutonium battery and there was part of me that felt like screaming "Why didn't you give Curiosity and bucket and spade??? Dig your sister out, Curiosity!!" Alas, I don't think NASA's budget would have extended that far.  I really hope that Oppy won't Rust In Peace and that maybe, there will be a clearing of her solar panels and she magically leaps into life.  Ironic too, that I have switched from referring it to an inanimate object and now refer to it as a 'she'.  Such is the power of a media forum.
Tags: astronomy, mars rover opportunity, oppy
Subscribe