Fantastic Beasts and Where to Find Them: The Crimes of Grindlewald

A couple of months ago, the internet caved in briefly with a topic besides Trump, Brexit and the size of a Kardashian arse.  Then news of Fantastic Beasts and Where to Find Them: The Crimes of Grindlewald hit the media.  Footage of the film left the fans poring over the possibilities and Instagram practically exploded with photos of Jude Law’s Younger Dumbledore. 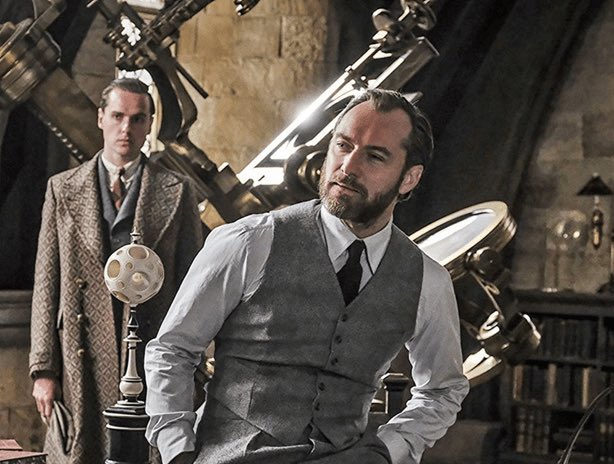 I know that I am a little too old to be a Potterhead, but I unashamedly am.  Read the books with my youngest son, who grew pretty much in line with the young wizarding boy.  I have taken to Fantastic Beasts in similar fashion. Comparing FB I and II has been difficult.  I instantly liked the first film and have watched it several times since.  Minor gripe here – way too much CGI and maybe even TMI loaded into one film.  Less is more, let me tell you.  In FB II, things were surprising – I grew to like Newt a lot more; portrayed less of a constipated Brit and more of a nuanced individual.  Tina has emerged as having some balls, which was a definite gear change (thought she was a bit of a drip in Beasts I).

There was less action from Jacob; which is a shame – a character who unexpectedly was a hit with fans, stealing some of the limelight away from our unlikely nerd-hero Newt.  Disappointed by Queenie’s defection, too. Hopefully that will turn out in the wash; I want SOME happy ending there. Also, I liked Nagini and don’t see what all the fuss is about.  Politically, I know that it’s about a white man eventually owning an Asian woman-turned-snake – I can see why that might rub some up the wrong way, but I think she was an empathetic character and hopefully, this will be sensitively handled in the future.  Credence shows promise, now THAT could be the pizazz that is so needed in this setup.  And this is where I am going with it.

Forget the obvious plotholes and other problems for a moment.  Unlike some others, I was not going to judge Johnny Depp’s portrayal of Grindelwald and be biased against him, based on his much-troubled private life.   A glimpse of him in Beasts I told me that Depp had some spadework to do to be a) convincing and b) to prove to Rowling and Potter devotees that this was not such a bad idea.  The truth is, I was a little disappointed that Colin Farrell could not stay in his role (for obvious non-spoilery reasons).  I personally thought that Farrell was far more charismatic, but I suppose we couldn’t have had a too seductive antagonist, in case it spiked interest with the far right in real life – Lord knows we can do without that right now.

Just as well – In Beasts II, Depp was less than uninspiring.

Played it deadpan – supposedly a psychopathic stance? The key to being a good one is to have a magnetic personality, or have some persuasive ace up his sleeve.  Depp had neither.  Not sure if that is a combo of lacklustre screenwriting with less than compelling performance.  We will have to see. Jude Law, however….

I used to think of Law as an overrated pretty boy.  Certainly the camera loved him, alongside a cast of pretty girls who was left in his wake.  I considered him a better-looking Damon Albarn figure and didn’t think much more.  I did pay more attention when he was he was playing opposite Robert Downey Jnr in Sherlock Holmes (2009), though I preferred Downey’s performance, if I am honest.  Still, I thought :: Boy’s grown up a bit.  Got some gravitas. Could be someone to watch in the future.  Casting him as the middle-aged Dumbledore had interesting possibilities and indeed headlines screamed Dumble-damn as hot photo after hot photo appeared.  I too, thought he ‘scrubbed up well’ after seeing the FBII film clips.   Then I saw him on the on the big screen.  Today.  Dumbledore (who has ditched the starry dressing gown and tinkly hat, in favour of a natty three piece) has turned into Albus the Younger, with twinkly eyes, pert bum perched on a desk, finding his grilling by the Ministry of Magic faintly amusing….WT Actual F?

I am not usually one to follow a trend, but DumbleDAYUM!! He had probably 20 minutes max combined, but he had my full attention.  Strong, self-assured, charismatic – everything that Depp’s hour and a half portrayal lacked.  Believe me, I wanted Johnny to rise and prove his critics wrong.  I really hope he will be allowed to do this in the up-and-coming FB film franchise.  I feel, however, that Law will own Depp in the very same way that Alan Rickman trounced Kevin Costner’s Robin Hood.  Personally, I would like to see the sides more evenly matched, or this is just going to be another (albeit grown) boy wizard protagonist versus a quite insipid antagonist rerun.