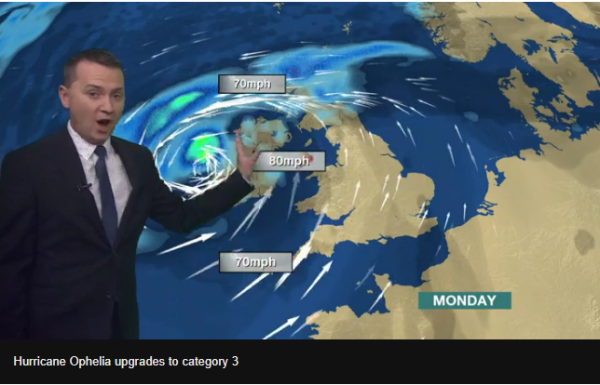 So, according to the Met Office, we are going to be walloped by the tail end of Hurricane Ophelia, although not as trashed as Ireland will be.  I think it's due to rock up at 2am tomorrow morning, three hours before I am due to be up for work.  Sometimes, these things literally blow over the top of us and either hit elsewhere or fizzle out.  However, this storm seems to be along similar lines to the Storm of '87 where even though Cornwall only saw a small amount of damage, southern Britain had sizable chunks taken out of it and sustained loss of life.  We get gales down here in Cornwall, but they have been getting a bit more insistant as seen in the Valentine Storm of 2014

At these times, I pray for the my roof of my cottage and car to be in tact and hope that we don't lose the electric.  A generation ago, it wasn't unlikely for the electric to be out for a couple of days and thankfully, it doesn't do that so much now.
Tags: hurricane ophelia, storm 2017
Subscribe