Feline Sad: Cat who was 'Mayor' of Alaskan Town For 20 years Dies 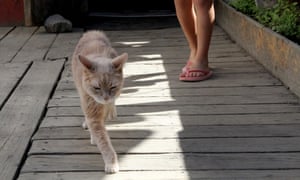 Stubbs, who liked to drink water and catnip from a margarita glass, was elected mayor of Talkeetna in 1998.

Stubbs, the honorary feline mayor of the Alaska town of Talkeetna, has died at the age of 20.

The animal’s owners announced the cat’s death late on Saturday in a statement.

“Stubbs lived for 20 years and 3 months,” the family wrote

“He was a trooper until the very last day of his life; meowing at us throughout the day to pet him or to come sit on the bed with him and let him snuggle and purr for hours in our lap.”

Full Story at The Guardian HERE
*~*~*~*~*~*~*
A lovely story - I can almost hear the opening credits for Northern Exposure already.  Here's hoping Denali can walk in his furry footsteps:-)
Tags: cats
Subscribe