It is a week since Dill had to be put down and I think the family has moved away from the raw grief stage (where you are crying several times a day) to the stoic, accepting and adjusting stage (where you have stopped crying, but tears are brought on by the discovery of your pet's favourite toy - or in our case, Dill's brush).  I have been pondering on the nature of a human's bond with their animals and, although it is different than the connection one would share with a fellow human, it is a profound experience that is underlined when the pet dies.  It is an uncomplicated, unconditional love from both human and their furry companion that teaches us about the unselfishness of that love.  Our cats still cuddled and loved us even if they weren't hungry/cold/did I mention hungry?  We invest time in pets that sometimes are not remotely lovable.  For instance, we had a feral cat once - she was a spitty, spitey, most difficult bundle of fur I have ever had the misfortune to meet, but once we had settled on terms of engagement, she accepted the occasional stroke and lived to be an exceptionally crabby age of fifteen.  Still have a soft spot for her; her soft spot for me was ususally a claw in the back of an ankle - but that's for another day. 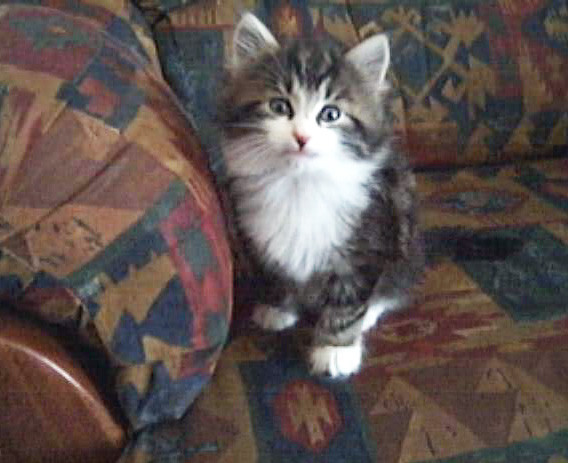 Dill aged 6 weeks July 2003
What did Dill teach me, that the other pets never did? Our first introduction was me plonking his smelly, matted bottom in a luke warm solution of Fairy Liquid, then teasing his fur into some kind of shape.  He had been taken away from his mum too young and I had to nurse him a bit and find old discarded teddies so he didn't feel lonely. Dill aged 3 - Summer 2006
He grew into the most amazing cat, rewarding me by never being too far away and always being available for an affectionate head rub or cuddle.  He was there in good times and bad and had caused many ours of ceaseless entertainment, which mostly consisted of us trying to get one of many field mice out of the dining room before he found it, killed it, left it in a secluded spot - only for us to find it days later when the corpse had produced flies.  I don't know who was more entertained - Hubby building a complex system out of planks to guide the mouse into a humane device via a system that would put a pythagoras switch set up to shame, or Dill, who had wondered why some humans had regressed into being such crap hunters. 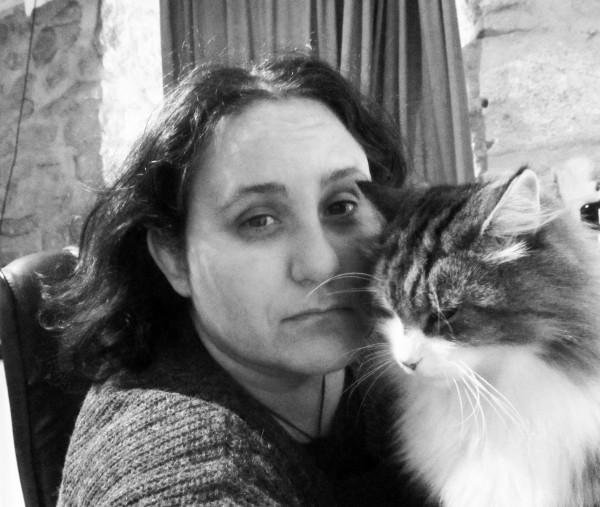 Dill and Me - Autumn 2013
In his later years, he would be my constant companion whilst i tapped out my countless essays from Access to the final BA English assessment back in May this year and assisted me by sitting on my keyboard/mouse/notes, staying with me in the long dark nights where I only had rain, tea and Classic FM for company.  I think this is the favourite one I have of he and I together. He was my beautiful boy and all round amazing mog.  Even Prodigal 2's mates were a bit cut up when they heard of Dill.  To quote one of the bigger, hairier guys

He was.
I have come to the conclusion that animals teach us about a love that cannot be expressed in the same way that we have with each other as humans and I think that our close interaction with them somehow reminds us how to be better people, for they enrich our lives on a level that no other human can surpass.

I am not sure re my thoughts on the Rainbow Bridge theory that some people abide by.  I kinda found it a bit schmalzy, a bit cloying, but obviously in recent times I have had to review my feelings about this.  For if there is a Rainbow Bridge, when my time has come, I want to find it and discover Dill waiting for me
Tags: dill, rainbow bridge
Subscribe