Catching Up With Neil Gaiman 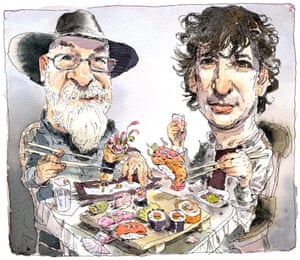 The problem that I have with Neil Gaiman is that I have only managed to read snippets of his stuff as other stuff always got in the way.  I overlooked Good Omens (which was a Pratchett/Gaiman production) by mistake - had originally bought it, then lost the book and never replaced it.  I have read a part of his Neverwhere novel, then found myself swept up by coursework and other lit things, which where miles off from any of his stuff.  I have seen his in several interviews and documentries and I love his speaking voice.  I have managed to track some of his work down on Audible (and he does at least narrate that himself).  I think post BA, I will settle down to read his stuff more in depth.  Especially since my sister commented yesterday that in some of his stuff, she couldn't make head nor tale of it and only took Amanda Palmer's version of his works.

There are two other authors I want to track down and read - specifically because I liked them in interviews that I have caught on SKY ARTS etc.,namely Val McDermid and George R.R. Martin.  Two very different genres, but interesting people whose books I promise I will catch up on.