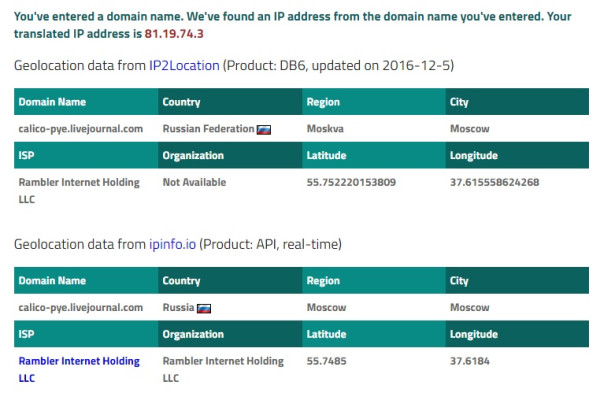 For a start, that is not my IP address - I entered both domain name and personal IP separately HERE and got two distinctly different addresses.  I did the same with my Dreamwidth account and found that it was still in the USA, primarily at Virginia and Wisconsin. Above is my LiveJournal domain, which in addition tells me where the servers have relocated to. It looks like they moved lock stock just over three weeks ago.  Thing is, in real terms, what does that mean for me?

Well, when it came to case-sensitive material, I haven't really logged anything - the days when the net was comparatively free of hackers has long gone. Not that they would be that interested in what essentially is just housekeeping. However, I do have a couple or so pieces of written work, which (let's face it) will not be up for the Man Booker prize anytime soon, but of which I want to retain my autonomous hold.  Thing is, these days (especially with the turn round of our political scene) who would you trust MORE? Our 'Russian Friends' or our 'American Friends' (though it must be said, Dreamwidth don't appear to have a decernable agenda and in theory, nor do SUP)?

But for the record, SUP - just what IS your game, exactly?
Tags: dreamwidth, livejournal, sup
Subscribe