Last night I had stopped at p.504, because I wasn't taking much of it in, to be frank. Fragments of text are ok to decipher at two in the afternoon; not so great when you are an hour off of bedtime.  Words and bars of a song - even printed (but not bevelled) braille, which is read as follows;

'The walls are endlessly bare.  Nothing hangs on them, nothing defines them.  They are without texture.  Even to the keenest eye or most sentient fingertip, they remain unreadable.  You will never find a mark there.  No trace survives.  The walls obliterate everything.  They are permanently absolved pg all record. Oblique, forever obscure and unwritten.  Behold, the perfect pantheon of absence' (p.423).

Staring into an abyss and letting it stare back at you.

As previously discussed, Navidson (the berk) has gone back into the labyrinth, this time fully kitted up AND on a bicycle no less.  He is the aesthete , the perfectionist who WILL NOT REST until there is a conclusion. Critics have said this is Navidson's need to resolve a cycle (caused by his painful photo of  'Dying-child Delial'), or be self-obliterated. All or nothing.  This is very similar to Truant's obsession of the manuscript, trying to make sense of it to find peace in his own life or die trying. 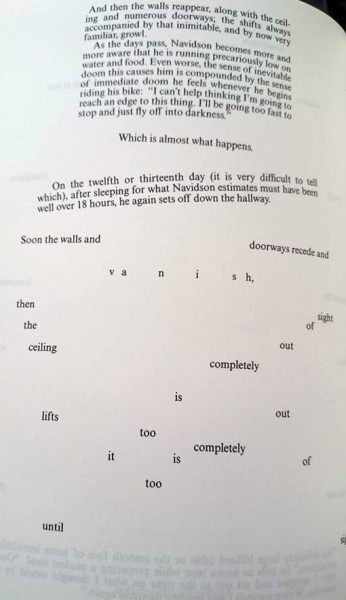 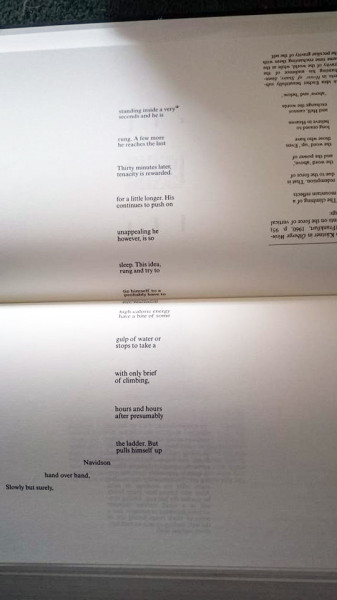 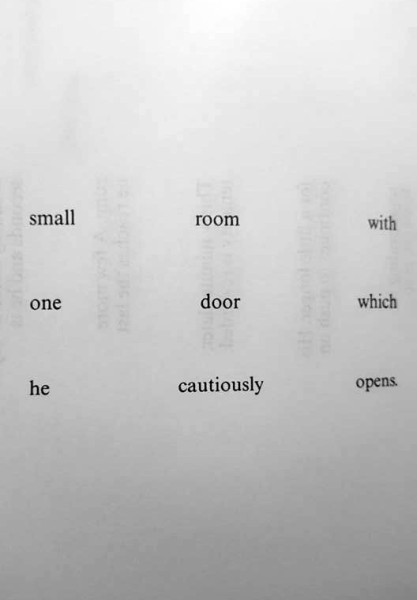 The above text shows edging along a wall in a confined space.  The following two pages, the space becoming smaller and the sense that Navidson is crouching then crawling along a corridor. 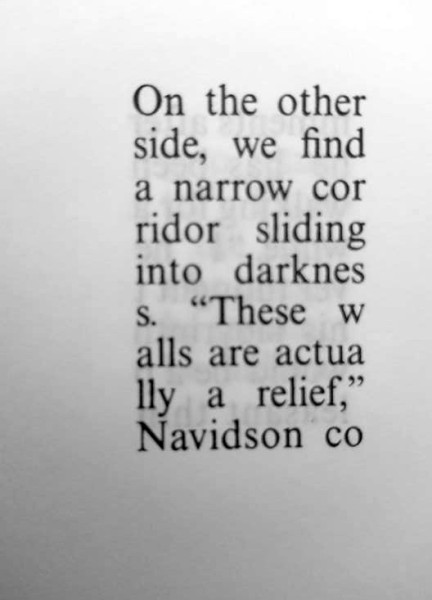 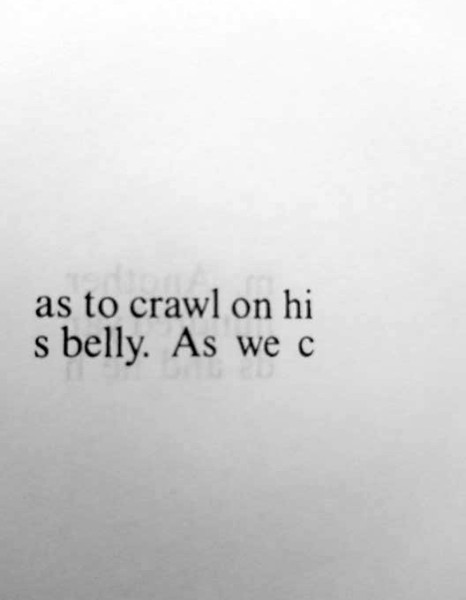 Out of luck and out of provisions, Navidson awakens to find that he is sitting on nothing and calculates that he must be falling, like some deranged Alice down the never-ending rabbit hole.

'"There is no wind, no sound, no change of temperature.  There was just this  terrible emptiness reaching up for me"' (p.436).

Perhaps then, this is about Navison's nemesis - the make or break that excludes everything else. If the fall is textual, then there will be a hell of an abrupt full stop at the end. He starts to realise that he is dying and thinks of his children, Karen.  His life has been governed by 'seat-of-the-pants experience', but when faced with death, he realises the sum of his life is his family, his wife.
Interesting; as Navidson's end seems inevitable - in Truant's world, his best friend Lude has just been killed in a motor cycle accident. Truant's already-flimsy sense of self unravels further and it looks like he is trying to find his long lost mother.

I get the sense too, that realities are sliding - who in fact is having this trip? Johnny or Navy? Is Johny actually alive? Or rather, is he a thought-up part of the story - functioning merely as an agent to Zampano's writing?

Quote of the Day

'"I have no sense of anything other than myself"' (p.470).  Navidson making himself accountable?


Shame there isn't a Shmoop or Sparknote page to make proper sense of this - probably because it would end up twice as long as HoL and that would rather defeat the object.
Tags: house of leaves, mark z. danielewski, reading list 2016
Subscribe