OK, so I am at a stage where things are getting a bit weird; the house dimensions have split into rooms/labyrinths/spiral staircase - none of which are seen from the outside of the property and seem pretty featureless inside (only described as an 'ashen' grey).  Actually, the tunnel/stairs scenario brought me back to thinking of 9 Gimmauld Place, which very recently has had a mineshaft open up near by. Ironic: my former abode with its sad history and unnerving atmosphere - my very own retrospective 'House of Leaves'.
MZD has thrown in yeards of Greek mythology that he keeps on crossing out, specifically Minos etc.  Oh and references to Echo and Narcissus, which I can fully relate to.  This is interlaced by Johnny's sexploits, which veer from mildly amusing to a bit icky, so I think MZD has succeeded in making the reader a grubby voyeur in his/her own right.  Kinda making me realise that this would be a prime example to my Postmodernist module last year.  An expedition has been mounted and people go missing. 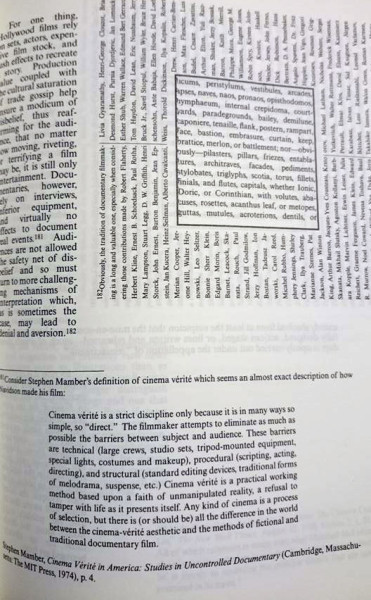 Mostly, my reading pattern goes relatively well when I can carry two stories and overlapping real/false footnotes.  It turns iinto a totally different ball game on (p.120 onwards), where the narratives are back-to-front, upside down and are mostly listings, especially about makes of light bulbs, cabling and specific cuts of wood. 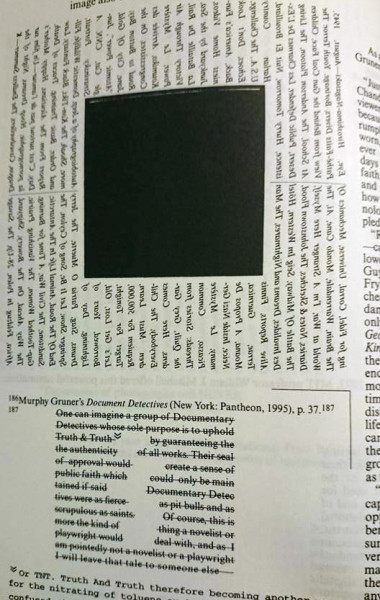 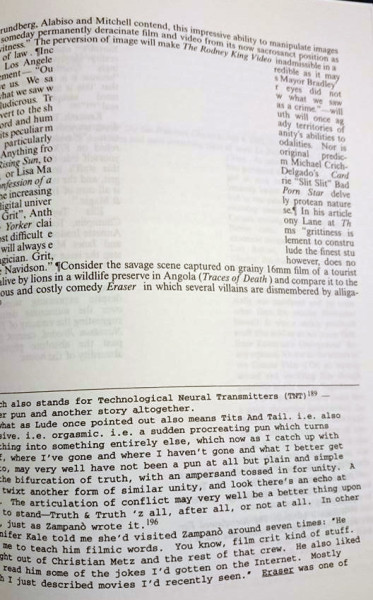 About p.138, it goes spectacularly pear-shaped; MZD seems to have shredded a thesaurus, a DIY catalogue, the 'academic' paper and lists of names and places that really have NO. MEANING. AT. ALL. Plus later (p.144-145 above) some of it is back to front, or missing, or wtf - I don't know...but it does underline the notion of being lost and disorientated.

I had wondered earlier whether the house reflected people's mental states; lo and behold, the various unreliable narrators more or less ponders this theory:

'some critics believe the house's mutations  reflect the psychology of anyone who enters it [...] the house, the halls and the rooms all become the self - collapsing, expanding, tilting, closing, but always in perfect relation to the mental state of the individual.' (p.164)

'the psychological dimensions of space [...]"in the perpetual process is a single sensation - a 'feeling about that particular place..."(p.175).

I have heard that some people (even noted academics) have thrown it against the wall, deeming it 'unreadable trash', but I would say that the layout conveys a certain something.  Johnny's drug taking and dwindling mental state, the disappearance and madness of the men seemingly either trying to kill each other, or (Reston and Navidson, take note) are seemingly being terrorised and/or 'eaten' by the house.  It aptly portrays distorted time, defragmentation, claustrophobia, agoraphobia, confusion and abject madness - the fonts/spacing/lay out bear witness to this.  Rather than a deterrent, I feel that it draws you in and gives you a more visceral experience of the stories.

I have read to page 182 (not so hard when the last few pages have about five lines on each page).  I am sticking with this because it IS challenging, BUT...I see it as a multi-layered artefact.  It is difficult to keep it all together, but I think it is worth the effort.

NOTE TO SELF- If I am ever in a labyrinth that changes dimension and/or starts 'growling' (which it does in HoL) - run for the fricken' hills!!!
Tags: house of leaves, mark z. danielewski, postmodern, reading list 2016
Subscribe