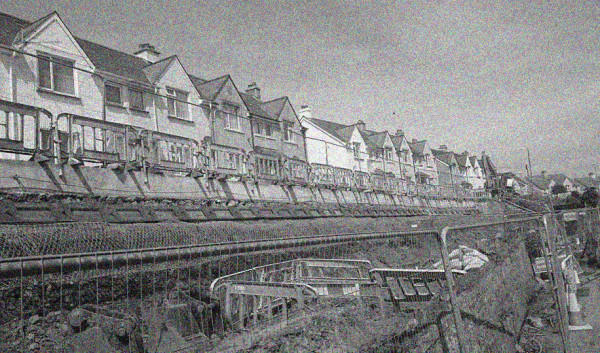 By chance, I met a lady (JS) who I had known in 'Grimmauld Place' and I asked her about the ongoing roadworks outside the properties.  The news had totally slipped passed my radar and in fact the road is closed because a dirty, great mineshaft had opened up over a year ago.  Cracks had appeared in kitchen walls and the residents were told that the small hole was nothing to worry about and that it was to do with the water board.  That changed when the ground shifted. Work began re shoring the site at Christmas last year and is still ongoing. Originally, it was between no.17 & no. 23; now the digging and shoring has stopped short of my old place. Huh, I thought - there is no way that house is moving anywhere. I bet the place has armed itself. I say that, because there had been several incidents which made me consider that the house was haunted.
Whatever it was, it used to scare the bejeebus out of my former partner - children's footsteps at the dead of night, sensations that someone has brushed passed you etc.  I spent several months away from the property, yet it was the only one that hadn't been burgled in that time (they couldn't have taken much, but I did have both a gas and an electric meter - yet everything was intacta).  Also, there was a series of terrible gales when I lived there, which had damaged all my near neighbours' rooves and had not touched mine.

I have been back a handful of times since, but this was the first time I stopped to take a proper look.  Whilst talking to JS, I briefly spoke to another lady who lives in my old house now.  Sadly, she is badly affected by mental health problems and therefore the conversation was brief.  She has lived there for over 20 years, so I gleaned that she was the lady who took up residence less than a year after I left.

Back to today's world and to a hole that is thirteen properties wide. The residents have been told that they should be ok as their properties were built on blue alvin rock. Then again, the ones who OWNED the properies in that row, had been told by the council that the site was originally just farmland - with nothing else residing there, other than tractors and ploughs, grazing in the Atlantic sunshine.  Looking up blue alvin (which sounds like a rootsy seventies rockstar), I can find comparatively little on the subject and if I was still a resident, I would be hoping that it is good old sturdy igneous rock, rather than possibly-prone-to-crumbling metamorphic/sedimentry rock.

Originally, I would have cheered if the whole lot had been swallowed whole (without casualties, of course).  Now, I feel a bit at odds with that idea.  Wonder what the impact this will have on my dreams of the place?