Oh, Those Intellectuals and Their Jokes.... 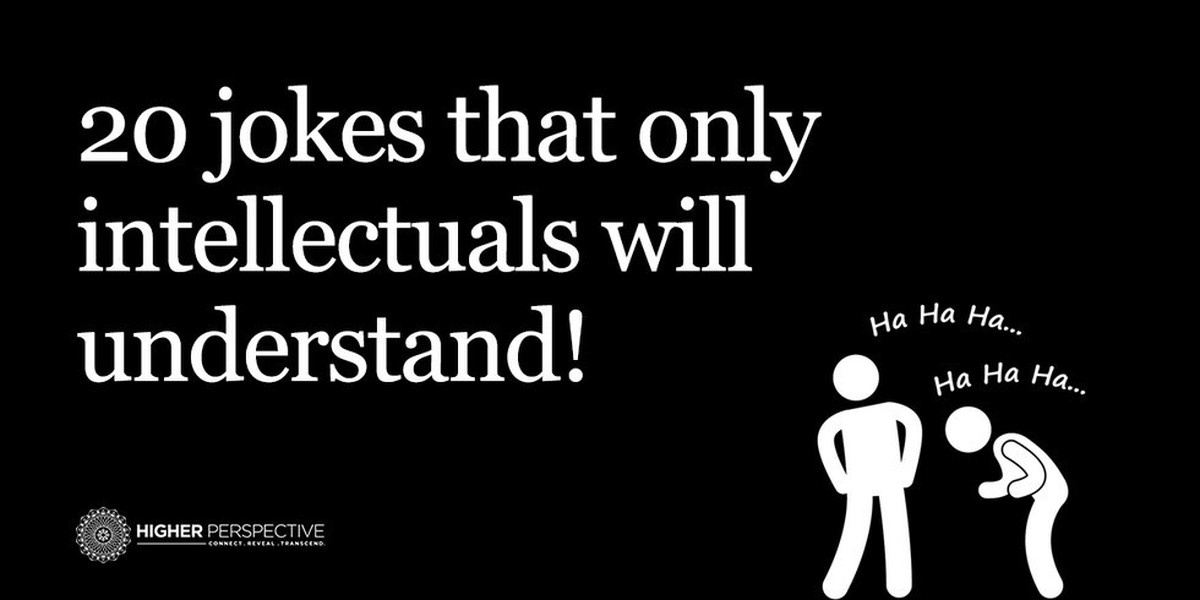 TBH, I think most people get the gist of the jokes – with only a tinsy amount of intellect.

What do you think?

1. Einstein, Newton and Pascal are playing a rousing game of hide and seek. Einstein begins to count to ten. Pascal runs and hides. Newton draws a one meter by one meter square in the ground in front of Einstein then stands in the middle of it. Einstein reaches ten, uncovers his eyes, and exclaims “Newton! I found you! You’re it!” Newton replies “You didn’t find me. You found a Newton over a square meter. You found Pascal!”

2. A mathematician and an engineer decided they’d take part in an experiment. They were both put in a room and at the other end was a naked woman on a bed. The experimenter said that every 30 seconds they could travel half the distance between themselves and the woman. The mathematician stormed off, calling it pointless. The engineer was still in. The mathematician said “Don’t you see? You’ll never get close enough to actually reach her.” The engineer replied, “So? I’ll be close enough for all practical purposes.”

3. A buddhist monk approaches a burger foodtruck and says “make me one with everything.” The buddhist monk pays with a $20 bill, which the vendor takes, puts in his cash box, and closes the lid. “Where’s my change?” the monk asks. The vendor replies, “change comes from within”.

4. Jean-Paul Sartre is sitting in a cafe revising his first draft of Being and Nothingness. He says to the waitress, “I would like a cup of coffee please. No cream.” the waitress replies, “I’m sorry sir, but we’re out of cream. How about with no milk?”

5. Noam Chomsky, Kurt Godel and Werner Heisenberg walk into a bar. Heisenberg turns to the other and says “Obviously this is a joke, but how can we tell if it’s funny?” Godel replies “We can’t know that because we’re inside the joke.” Chomsky says “Of course it’s funny, you’re just telling it wrong.”

6. It’s hard to take kleptomaniacs and puns seriously. Why? They take things literally.

7. What do you get when you cross a joke with a rhetorical question?

8. Three logicians walk into a bar. The bartender asks “Do all of you want a drink?” The first logician says “I don’t know.” The second logician says the same. The third says “Yes!”

9. A Roman walks into a bar and asks for a martinus. “You mean a martini?” asks the bartender. The Roman replies, “If I wanted a double, I would have asked for it.”

10. Another Roman walks into a bar, holds up two fingers, and says “Five beers please!”

11. A logician’s wife is having a baby. The doctor hands the baby to the dad. His wife asks if it’s a boy or girl. The logician replies “Yes.”

13. How do you tell the difference between a plumber and a chemist? Ask them to pronounce unionized.

15. Pavlov is at a bar enjoying a pint. The phone rings and he shouts “Oh! I forgot to feed the dog.”
16. Helium walks into a bar and orders a beer. The bartender says, “Sorry, we don’t serve noble gases here.” Helium doesn’t react.

17. Shrodinger’s cat walks into the bar and doesn’t.

18. A Higgs Boson walks into a church. The priest says “We don’t allow Higgs Bosons in here.” The Higgs Boson replied, “Well, without me, you can’t have mass.”

19. A programmer’s wife asks him to pick up a loaf of bread and, if they have eggs, get a dozen. The programmer comes home with a dozen loaves of bread.