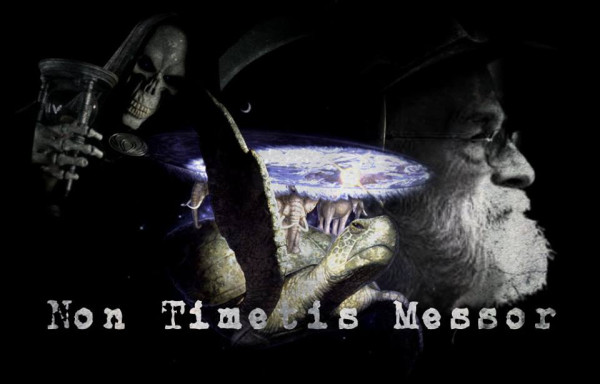 Tributes are pouring in at the Facebook page - I can't quite believe it.  I first picked up a book of his back in 1990, Wyrd Sisters, then Pyramids and found myself totally hooked.  I especially love his 'Nightwatch' series and the 'Wyrd Sisters' one too.  His books to me represented escapism, where I could read, laugh - even shed a tear.  The books were like minature portals, every Kidby cover was a potential door.  It was not like he was some kind of great epic master of the Fantasy league - such as Tolkien, Le Guin et al. - but he wrote with such pathos, such humour that he was (in my estimation) more readable and somehow more believable too.

I haven't been reading light fiction for a while because of my academic commitments, but I picked up Feet of Clay recently and remembered just what it was I liked about Pratchett - ditto Thud! I am gutted - I can't believe he has gone.  I had been contemplating writing an article on his stuff for uni only recently.Think what it must be like to have such a talent that your work actually touched other people's lives, via escapism into the immensely enjoyable books.  Above all, he took the fantasy genre and satirised it - to me, it made it less po faced and more accessable.
"Don't think of it as dying..just leaving early to avoid the rush.." (Terry Pratchett - Good Omens).